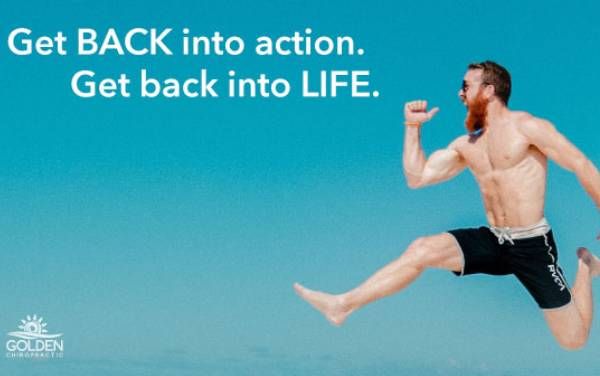 HERNIATED DISC TREATMENT GETS YOU BACK INTO LIFE FASTER

I have a patient who has frequent pain in her lower back and leg. It began some years ago when she herniated a disc at her L5 vertebrae on the left. She is a mother to two children and a small business owner. You may know her as Dr. Goldi. Like most of us here…

Like most of us here in Santa Cruz County, Dr. Goldi loves being active. When she experiences shooting pain in her leg following gardening, she feels frustrated. During weeks with a lot of hours in the clinic, her disc herniation can feel almost like a disability. The worry of not being able to perform without pain can cause her a lot of stress. That’s why I give her adjustments regularly.

What are the symptoms of a herniated disc?

Symptoms of a herniated disc usually present as shooting pain into the hands or feet. Often patients are bent at the waist or neck without the ability to stand up straight. Sciatica may also be a resulting symptom of disc herniation. Left to its natural progression, disc herniation may lead to numbness and tingling in the arms or legs. This happens when prolonged nerve compromise alters the body-brain connections.

When using improper body mechanics, you may experience a “pop” noise in your back or neck. A few hours to a day later, you start experiencing numbness, tingling, or shooting pain from the neck into the arm, or from the lower back into the legs.

Who is likely to get a herniated disc?

The common patient is between the ages of 25 and 55. As we age, disc herniation becomes less likely. Finally, some good news about aging!

What exactly is a herniated disc?
The disc is like a jelly doughnut, but not in a good way.

A disc is commonly described as a jelly doughnut. It is a soft and squishy fluid, called the NUCLEUS PULPOSUS, wrapped inside of a rigid shell called the ANNULUS FIBROSUS.

Over time, the annulus breaks down from a series of repetitive stress injuries. The culprit is usually improper and careless lifting technique. Over time, the annulus weakens. Then something as simple as lifting up a feather could cause the nucleus to herniate out of the damaged annulus in the weakest place. The whole process resembles smashing a jelly doughnut in between your hands. Eventually, the jelly will find a way out of the dough in whichever direction the dough is weakest.

Initially the body recognizes the disc tissue as an invasive tissue. The immune system attacks the disc. This causes a massive inflammatory response to the foreign tissue, causing pain in the area where the herniation has taken place.

After a few days or a couple weeks, symptoms in the hands and legs will begin to present. It feels like shooting pain. This is from inflammation and pressure from the disc affecting the nerve.

How do you diagnose a herniated disc?

Following a through history, an examination is performed. I will perform orthopedic tests designed to detect disc herniation. If a disc herniation is suspected, an MRI will be ordered. This is to confirm the presence of actual disc tissue that has left its normal position in the spine. X-rays will not show the necessary detail of soft tissue injuries like disc herniations.

What happens if I don’t get treatment for a herniated disc?

If treated properly, the body’s inflammatory response to the disc tissue will be reabsorbed by the body. Spontaneous disc resorption has been documented to happen in a high number of cases. It’s important to maintain high levels of function and decrease pain levels. From there, the body will work its magic on the disc.

What’s the treatment for a herniated disc?

Dr. Goldi and I have found that regular adjustments every week help to keep her pain and symptoms at bay.

Many studies have been published regarding disc herniation and chiropractic intervention.

Adjustment and exercise have been shown countless times to be safe. We believe these are the most effective drug-free methods to managing the pain while the body heals itself.

How do you prevent a herniated disc?

A disc herniation usually happens when someone is lifting something. Flexing and rotating the spine while bending, lifting, or twisting can cause the herniation. Common examples include reaching into the back seat while sitting in your car, or lifting/pulling while bent over gardening.

If you are careful with your body you can protect it from repetitive motion injuries.

Want to learn more about chiropractic and disc herniation?