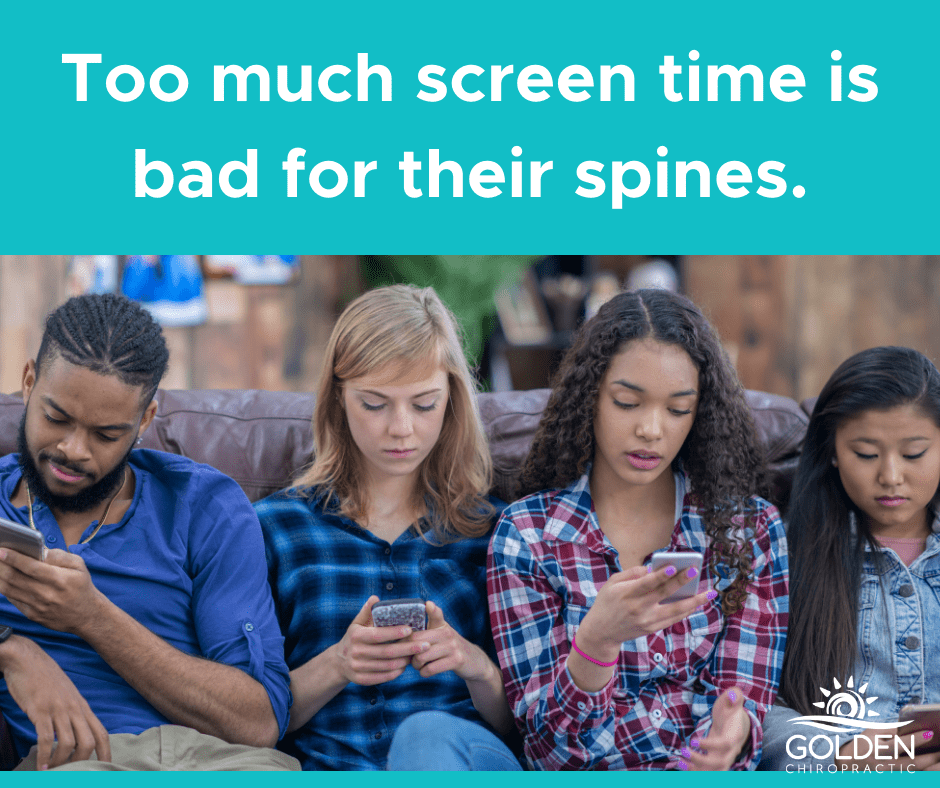 Epidemic of Teen Neck and Back Pain

One day I found my daughter using 3 screens at the same time! She was on her smartphone three-way video chatting with her best friends, playing Animal Crossing on her Nintendo Switch with another friend, AND watching season 7 of her latest Netflix binge! I was both horrified and amazed.

This “new online normal” is not good for the spine.

As a chiromom, I am concerned.

Neck and back pain are very common in adults. In a general population, the 1-year incidence of neck pain can be as high as 40%. And based on my last year's patient explosion in the teenage sector — it’s also becoming more common for teens.

Too much screen time is bad for teenage spines.

Text Neck is becoming more of an issue in teens.

Text neck is due to poor posture related to technology — hunching over the phone with the chin practically resting on the chest. Slouching over portable gaming devices. Leaning into laptops to get their school work done. It all adds up to pain and eventual degeneration.

Why am I seeing an increase in neck and back pain in teens?

Are they lazy slackers who just lean over their phones all the time? I know as a frustrated working mother of teens, I feel resentful of the fact that they hadn't been doing much of anything over the last year. Am I being too judgmental, or is using technology causing this uptick in teenage pain? Being the science nerd I am, I did some research to answer these questions.

A 2017 STUDY BY ARIËNS ET AL. found a positive relationship between neck flexion and neck pain.

Repeated stress on the neck leads to degeneration.

“Text neck,” a 21st-century syndrome, is a term derived from the onset of cervical spinal degeneration resulting from the repeated stress of frequent forward head flexion while looking down at the screens of mobile devices and “texting” for long periods of time. Text neck is becoming more common as more people, especially teens and adolescents, hunch over smartphones.

Globally, we spend too much time encouraging the damage.

Cumulatively, this is an average of 1,825 and 2,555 hours a year, respectively, of excess stresses seen in the cervical spine area. Hansraj adds that it is possible that a high school student may spend an extra 5000 hours in poor posture.

Our heads grow heavier as we lean forward.

The weight put on the spine dramatically increases when flexing the head forward at varying degrees [Figure 1]. A full-grown head weighs 4.54 to 5.44 kg in the neutral position. As the head tilts forward, the forces seen by the neck surges to 12.25 kg at 15°, 18.14 kg at 30°, 22.23 kg at 45°, and 27.22 kg at 60°. The frequent forward flexion causes changes in the cervical spine, curvature, supporting ligaments, tendons, and musculature, as well as the bony segments, commonly causing postural change and pain felt in the neck and other associated areas.

Musculoskeletal neck pain is a common multifactorial disease in children and adolescents, implying that there are numerous risk factors contributing to its development. Bending the head, neck, and shoulders over cell phones and handheld devices, along with distorted neck positioning when sitting, studying, and watching television, can lead to incrementally increased stresses in the cervical spine area. These stresses may lead to early wear, tear, degeneration, and possibly surgeries. Other developmental, medical, psychological, and social complications are also of concern.

We need to straighten-up and move in healthy ways.

While it is nearly impossible to avoid the habits and technologies that cause these issues, young individuals should make an effort to perform activities with a neutral spine and to avoid neck flexion for hours each day.

Many of my teenage patients over the last year have been grossly under exercised.

They’ve been stuck at home with nothing much to do but spend even MORE TIME on technology.

What happens with lack of use/underuse of our bodies?

Muscle atrophy that leads to —

Other common causes of teenage back and neck pain.

It’s not just too much technology use.

The good news — you can treat and prevent teen back and neck pain at home.

Treat neck and back pain with chiropractic.

More and more parents are bringing their teens to see us at Golden Chiropractic. With so much increased device usage, I’m expecting to see a LOT MORE teenage neck pain. We can assess the pain and advise on the best treatment plan going forward. If your teen is in pain, come see us, so we can stop the pain today and prevent lifetime problems tomorrow.

With our help — reminding them about better posture, spending time outdoors, and getting adjusted — they will be able to get out of pain and back into life. Together we can reduce poor posture and get our kids moving in healthier ways.

Need help managing your teen's back and neck pain?

Schedule an appointment for your teen to have a chiropractic exam.